If you watched the 2001 film ‘Godzilla Mothra King Ghidorah: Giant Monsters All Out Attack’ then you probably think it was a thrilling film with few flaws. If so, I’m glad you enjoyed it! I  did too!

However, for such an awesome film it had its problems. I noticed several which I will now go into: 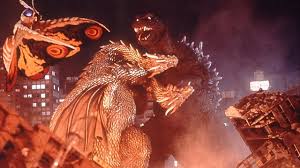 I hope you enjoyed this post! Let me know your thoughts in the comments section below. Till next time!