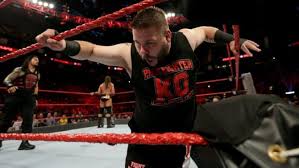 For of those of you wondering: ‘yes I do like WWE.’ I think it is an art form and more entertainment and not a true sport. I know it is scripted and am not into it for the legitimacy but rather for the story and athleticism these performers put on every night.

That being said this article is about last night’s episode of Monday Night RAW and how I’d grade the show.

First of all the opening segment between Roman Reigns, Stephanie McMahon, Mic Foley and Kevin Owens was entertaining and continued the storyline involving HHH. Apparently Steph is Pro-Foley and begrudgingly allows him to make decisions. If she swerves it would shock but not surprise given her villainous on-screen character.

Foley made a match between Rollins and Rusev who interfered in last week’s main event between Owens and Reigns. Foley followed this up by putting Reigns in a match with Owens for the night. I immediately soured on this because this is another repeat match. To my delight Foley changed it by making it a steel cage match.

The following segment included Rusev berating Foley for giving Reigns a title shot at his U.S. Championship at Clash of Champions. Rusev begrudgingly walked out to face Rollins in singles competition.

The match was fast-paced. Both wrestlers’ styles are different enough to have a pretty good match between them. And they did. Rollins performed babyface high-flying maneuvers to the crowd’s delight and the match ended in countout.

This is not the attitude era. Non-finish matches tend to sour the crowd including me.

Did Charlotte and Dana need to face Sasha and Bayley in a tag match?

Despite winning this match pinning Bayley it would’ve made more sense to simply have Charlotte and her protege come out to beat down Banks and Bayley.

Think about it. Charlotte could have further damaged Sasha’s back and injured Bayley as well. This would not have cost her the title and would simply have beaten down her opponents so that their match this Sunday would be a walk in the park. Tsk Tsk.

Nonetheless, this was a good match and all women shined.

There’s no denying that Y2J has class and personality. But, even he and his list couldn’t save this 10 man tag. This match was thrown together and featured tag teams on the rise such as Enzo & Cass and The Club.

Jericho Shined and tag teams like The New Day and Enzo & Cass also got their stuff in. Perhaps they could have wrestled separate matches instead??

Honestly this was a good match! The back and forth between these guys kept me on the edge of my seat. I thought Cesaro would win but at various points of the match the opposite seemed inevitable. Finally, Cesaro has tied this up and now remains their final battle (at least for this series…)!

One thing I would have done to diversify their matches would have been to add stipulations to different bouts. Perhaps they could have made their second match a Falls Count Anywhere Match and their fourth match could have been a No DQ with the final match in the series being a Last Man Standing Match.

Strowman beat Sin Cara tonight. He seems to be getting better. Give him Titus O’Neill next.

Tonight Foley introduced four members of the new cruiserweight division. They were hyped throughout the night and their match was excellent quality.

However, some drawbacks: this was a fatal-fourway match for the Cruiserweight Championship. The Champ TJ Perkins wasn’t there, and this fourway match felt hurried with too many spots. Sure. It’s entertaining and athletic. But, we could have done better with a one-on-one match and an interview of each man. Otherwise we are given lots of wrestling with no story behind the combatants.

Nia Jax was advertised for Clash of Champions to face Alicia Fox. Yay….

Owens and Reigns had a hard battle that was entertaining to watch and showcased their characters: the cowardly Owens tried to escape the cage but Reigns pummeled him over and over for a pinfall.

Reigns escaping the cage first kinda stank to me. Owens should have won by a hair. The following beatdown by Rusev was good and Rollins high-flying spot to close the show was great to watch. However, I as a fan don’t like Reigns and didn’t see sense in Rollins saving him.