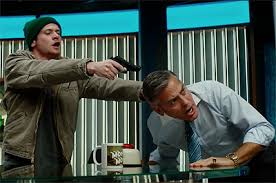 Today I discuss my thoughts on the film ‘Money Monster’ starring George Clooney and Julia Roberts.

The film revolves around the financial guru Lee Gates and an enraged madman Kyle Budwell (played by Jack O’ Connell) out to get answers via bomb threat on the stock plummet of multi-million dollar company, IBIS.

Gates’ director, Patty Fenn (played by Julia Roberts), guides him through the tense situation that follows. What ensues is pandemonium, a thoroughly captivating performance by O’Connell and Clooney, and heart-wrenching scenes that question what a life is worth.

Budwell demanded that he be heard; that IBIS give answers about their crash. Thankfully Fenn sees the bigger picture behind this disturbed man giving cues to Gates in ‘disarming’ him. Gates provides empathy and regard for the young man’s anxiety.

I felt my heart pounding when Gates put a challenge to the audience to buy stock to save his life from Budwell. It heavily disappointed me when the public did nothing to save him proving Budwell’s cynicism right. ‘What is a life worth?’ said Gates with pleading eyes. Good storytelling right here.

I enjoyed what happened next: Budwell’s girlfriend reprimanding and insulting him on live television. It’s not everyday you get to see a terrorist verbally ripped apart on TV. It was bittersweet justice. However, upon seeing how hopeless he was I felt sorry for him.

The rest of this story was paced nicely with IBIS, the cops and the remaining crew in the studio accurately depicted how a hostage situation truly is: frenetic, stressful, angry and chaotic. Thankfully, IBIS tracks down the president of the company, and with the help of a programmer in South Korea they are able to discover where the money disappeared to. This brilliantly shifts the focus on to IBIS and their corrupt CEO; redeeming Budwell in the process.

The final moments of the film depicts Walt Camby (Dominic West), the CEO of IBIS, drawn to City Hall where Budwell and Gates (now aiding Budwell) confront him on live television. They reveal that Camby used the stolen money to invest in a miners strike in S Africa. This subterfuge backfired and the company lost eight hundred million dollars never to regain them. Exposed, Camby refuses to apologize but is forced to admit it was wrong by Budwell. Satisfied, Budwell throws away the detonator only to be shot dead. Gates, now sympathetic to Budwell rushes to his aid. The following scenes depict the audience at home stunned silent; one young man watches in awe only to return to his game of fooseball in complete apathy.

My overall impression of this film is a good one. I think the acting and storytelling were spot on. O’Connell delivered brilliantly the story of a downtrodden, justice-seeking vigilante. He captured the emotions of disgust, pain and frustration amazingly. This was stellar acting from a lesser-known actor was thankfully not overshadowed by the giants of the acting industry: Julia Roberts and George Clooney. I thoroughly enjoyed the actors’ chemistry.

This film made me feel strongly about the main character (first contempt then compassion), it caused me to change my opinion about said character, and held me glued to the plot all the way through. I now want to do my research before buying stock!

I would recommend this film to anyone. I give this film an 8.1 rating.