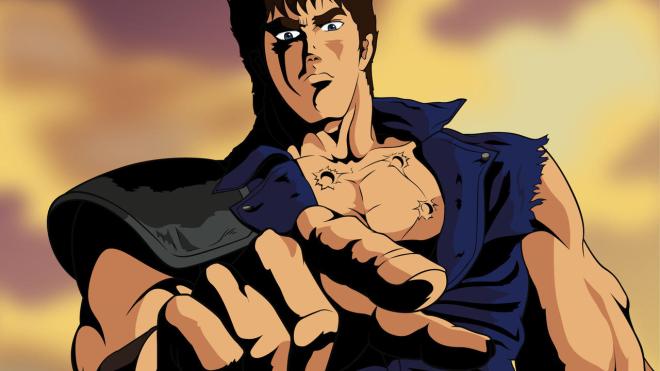 Greetings intrepid anime lovers. Have you watched any good manga lately? If so, is the 1986 anime film Fist of the North Star one of them?

In this film review I take on that film and how it impacted me. Let’s begin.

The anime starts off with a brutal attempted murder. The victim is Kenshiro and the assailant is his brother Shin.

Through over dramatic expository dialogue we learn that the two brothers (or schools) must never fight.

However, our blond-haired, douchey, over-the-top villain flagrantly disregards this rule and proceeds to maim our overly passive hero. Shin’s goons rejoice at the beating while Kenshiro’s love interest, Yuria, weeps. Yuria pleads for his life, hoping to strike a chord in Shin’s heart of stone. He only stops punching holes into Kenshiro when Yuria agrees to leave with Shin. Shin agrees and leaves with Yuria, along with all his baddies.

Kenshiro lies there in a mangled heap. His blood is pouring all over the gravel. Sheesh! And I thought me as a kid play fighting with my older sister was bad…

Anyways, some emo-looking giant goes to a temple to tell his father he will ascend to power after witnessing Kenshiro’s defeat. This giant, Rao, smashes two huge statues representing the two schools. Rao bids his father to seal his hands.

The destruction and bravado doesn’t end there. Rao looks up at the sky and with a loud voice shouts at the heavens. He claims he will face the gods themselves.

We cut to a scene where a little girl is being threatened with physical violence by a bunch of swollen uncouth bandits. Much to her delight and awe, a silent stranger comes to her rescue. The stranger cuts through the brigands like butter and even helps the mute girl talk.

Simultaneously, another lone hero arrives in a desolate town looking for Kenshiro. The man’s name is Rei and despite being a good guy he wants to kill Kenshiro.

Instead the two of them team up. They join forces to bring down a fifteen foot giant that can somehow absorb Kenshiro’s punches. (Hmmm. An interesting challenge that makes sense) The behemoth is unassailable until Kenshiro punches him in rapid succession like a machine gun. Only then do the blood and guts fly everywhere.

The duo move on to the next challenge: Jagi (another brother of Kenshiro’s).

How many brothers does this dude have…?

Jagi was an arrogant bully who tried to usurp Kenshiro’s rank as the Hokuto Shinken. Instead he got beaten within an inch of his life for his troubles. Jagi is severely scarred and filled with hate and malice. His cruel deeds have earned him the wrath of Rei.

Before they can battle Jagi shows off his size and musculature. Despite his mammoth size and fearsomeness he has difficulty breathing and the mask he wears holds his body together, preventing him from succumbing to his old wounds immediately.

They fight. Despite being endowed with magical powers like Kenshiro, Jagi is a coward who hides behind a gun pointed at Rei’s sister. He attempts to coerce Rei into fighting Kenshiro.

Kenshiro wisely remains patient and reminds Rei that Jagi is not to be trusted. He calls out Jagi into a one-on-one. Jagi foolishly accepts and does an even more foolish act: he reveals to Kenshiro that it was he, Jagi, that manipulated Shin into attacking Kenshiro at the beginning. Kenshiro burns with anger and viciously dispatches his deranged brother.

Rei does some brutalizing of his own when he takes out the henchman. He pleads with Kenshiro to help him. Kenshiro agrees and uses his powers to heal Airi. He even grabs a small flower and gently encourages Airi to hope for better days because like the flower life will bloom again.

Dang! This is powerful stuff!

The film cuts to the villainous Shin and his love-slave Yuria. They are in a palace of sorts. Shin proudly marches over to her who he trusts will be happy to see him. Instead, much to his dismay, he finds the lavish necklace he gave her cast to the ground. His gaze drops to the floor as he asks if she even likes lavish gifts. Yuria answers him ‘no’ but that she would rather have ‘the gentle embrace of a man with a tender soul like the grass.’

This is actually good writing!

While this is going in we see that Rao is conquering the world. He even changed his name to Ken-Oh for the occasion. The next target on his list is Southern Cross: Shin’s domain. Rao knocks on Shin’s door and kidnaps Yuria.

Arriving after these events, Kenshiro makes his way to the castle and confronts Shin. He makes light work of him with one blow.

However, before their battle can get into the next gear Shin has information to give. He tells Kenshiro that Rao has taken Yuria and already dealt a fatal blow to Shin. Shin is slowly dying.

Our hero, shocked at this turn of events, sets out for Rao’s stronghold.

This is really deflating! The main conflict of this story was Kenshiro confronting Shin and getting payback as well as rescuing Yuria. Why would the writers do this?? Why build up to something when you’re just gonna bait and switch? This was lame.

The children Bat and Lynn find Yuria’s cell and show her the wonder plant. For a moment her hope is restored…until Rao comes back and hangs her on a cross.

Rei offers to fight Rao while Kenshiro is offscreen. Needless to say, he dies. In fact, this futile suicide mission takes place while our hero is slowly trotting there to 90’s music!

What the hell! I laughed my heart off and I don’t think that was the movies intent!

Our hero finally stops stupidly power-strutting to find Rei dying. (Was the slow trot worth it Kenshiro?) Rei warns Kenshiro that he mustn’t fight Rao because he will die in the process. His plea is ignored…

The two brothers fight and boy is it a light show! Lasers, explosions, landslides and earthquakes ensue as the two steroid boys land several hits on each other. Their fight even causes tornadoes to appear and buildings to crumble.

At this point I’m not sure if this manga was going for a Superman-level battle or a Dragon Ball one. I’m pretty sure the power level was over 9000…

Finally, both brothers collapse to the ground bleeding and spent. Lynn returns with a strange glow and pleads with Rao not to kill Kenshiro.

Surprisingly, he listens and reassures Lynn he won’t kill Kenshiro. He looks on her with an unusual fascination and pleads for her to become an adult quickly.

What the hell…? That line makes no sense…

The credits roll and Kenshiro is looking everywhere for Yuria. Apparently, she has now disappeared.

Yeah…this anime was very bizarre. It was colorful, emotional, gory and intense.

Was it any good? Umm…

It’s not my cup of tea. While I’ve watched enough anime to expect random disturbing and nonsensical things I was still very shocked here. But even more unsettling for me was the main plot. How can you write a gripping main plot and discard it for a villain that was only vaguely introduced at the beginning. Removing Shin and inserting Rao was the dumbest idea in this film. When the main conflict between Shin and Kenshiro was cast off so was my interest.

Even the plot line with Rao had some lost potential. When he smashed the temple and looked to the sky to challenge the gods I thought we would actually get some battles between him and some cosmic figures. (Like Kratos from God of War). I hoped that maybe his mad lust for power would be in the background with his battles with the gods leading to a sequel. Instead they just made him another despot in a movie filled with mad despots.

Yuria also was so bland and generic. What was her personality besides being melancholic and mysterious? I was given no reason as to why Kenshiro loved her. She was as fleshed out as a cardboard cutout.

On the plus side this anime has several powerful messages about grief, war, hope and justice. Some of the lines in this film offer a good commentary on life and our expectations of it versus the cold reality that often greets us. Most characters are filled with such emotion.

But, no matter how good the drama and emotion are the story must be solid. I felt this film didn’t quite live up to its golden potential.

Fist of the North Star (1986) gets a 60% rating for me. You can skip this one but if you’re on an anime binge looking to add a notch to your viewing belt…go for it.

4 thoughts on “Fist of the North Star (Japanese dub)”