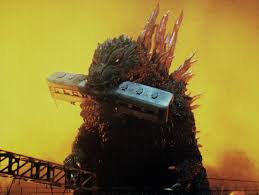 In this article I discuss my top five Goji designs of all time. As always, feel free to sound off in the comments section below if you agree or disagree!

This design was impressive and intimidating to me when I first saw it. Godzilla’s face is somewhat dog-like and aggressive. However, he appears too slow and heavy (lumbering at times) and this version (especially in vs Biollante) is one of the ugliest Godzilla faces to date. (First Appearance)

Kudos to Toho for making him menacing and giving him a long tail though!

In this film Godzilla appears tall, not as menacing but agile enough. His face conveys aggression but not overly so. Godzilla’s spines are the right size and at moments he conveys friendliness (touchdown jumps on Planet X)!

I love this film and Godzilla’s physical appearance is part of that endearment. (Godzilla Victory Dance)

I simply love this design. Godzilla’s face appears less aggressive, his skin is darker and more wrinkled conveying age, and the wearer of the suit appears to have a great range of motion. Just look at the battle in Tokyo!

It’s a pity this suit was only showcased in three films. It was used in Godzilla vs Gigan but not for the whole film.

This version quite simply takes the cake!

This version of Godzilla has free range of motion and captures the ideal size of Godzilla; he appears medium statured among the monsters and his tail isn’t overly long (Heisei). Final Wars’ Godzilla has an intimidating face that conveys rage, revenge and a short patience without appearing overly malicious (Heisei). His depiction in this film is that of an unstoppable juggernaut and his suit lends to that effect wonderfully.

This wonderful suit was very close to being my top pick. (Godzilla Final Wars)

When I describe Godzilla to people who have never seen the movies they picture a frightening T-Rex-Stegosaurus blend. No other version of Godzilla captures that ideal look better than Godzilla 2000.

This Godzilla truly captures the animal look that Godzilla is meant to portray. Godzilla may have been portrayed as a force of destruction (vs Mothra) or a devil (Giant Monsters All Out Attack) but at his core he is simply an animal. Godzilla 2000’s facial expressions and gait convey that of a lone dinosaur. He doesn’t seem evil or good but simply a creature. (Godzilla 2000 new fire)

In the end that is what sums up Godzilla: simply a creature…an impressive one at that.

Thank you for reading!